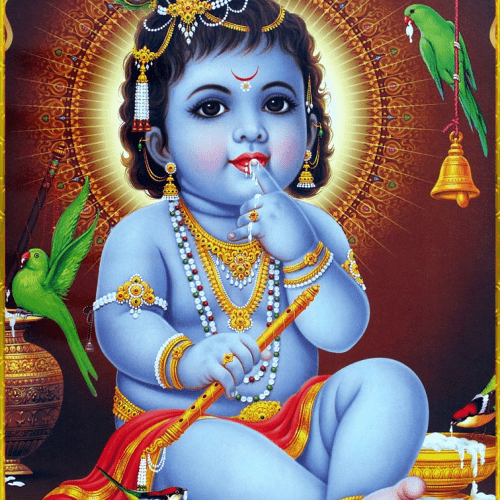 Krishna Janmashtami or Gokulastami is the Jayanti (day of incarnation) of Bhagavan Shri Krishna, the eighth of avatar of Lord Vishnu. Observed on the eighth day (Ashtami) of the dark half of the month of Shraavana, this festival is widely celebrated across India since Shri Krishna is one of the most well recognised and worshipped deities in the Hindu pantheon of Gods. Under the constellation of Rohini, the Lord incarnated to fulfil His purpose as described in the Bhagavad Srimad Gita 4.7/8:

yada yada hi dharmasya
glanir bhavati bharata (7)
dharma-samsthapanarthaya
sambhavami yuge yuge (8)
Whenever there is a decline in Dharma and evil predominates
I incarnate to vanquish evil and re-establish dharma.
Often worshipped as the most glorious, beautiful and perfect incarnation of Lord Vishnu, Shri Krishna restored Dharma by killing His demonic uncle Kamsa, and by helping the Pandavas defeat the cruel Duryodhana. Shri Krishna radiates a profound and divine love so that merely chanting His name or hearing of His pastimes brings deep joy to His devotees.

Birth of Shri Krishna
The tenth canto of the Srimad Bhagavatam narrates the birth of Sri Krishna.
On the banks of the River Yamuna, in the capital city of the Vrushni dynasty, Mathura, Shri Krishna was born to Devaki and Vasudeva. Devaki was the niece of the King, Ugrasen, who also had an evil and rotten minded son named Kamsa. The King gave his nieces hand in marriage to Vasudeva, a devout and saintly man of the Yadu dynasty.
The wedding was a grand and lavish one. Overjoyed at Devakis wedding, Kamsa took the reins of the golden chariot that carried the newly wedded couple. Suddenly, the heavens were torn by a voice that proclaimed Kamsa, fool, the eighth child of your sister will slay you!
In his wrath, Kamsa grabbed Devakis hair with one hand, and with the other unsheathed his sword to kill her, when Vasudeva begged his cruel brother-in-law for mercy, accepting imprisonment instead. Vasudeva promised to hand over all of their children at birth, and accepting this, Kamsa locked away the couple and in time killed six of their newly born infants. He had his father taken away and made himself King, and started to terrorise the people who prayed to be freed from Kamsas tyranny.
The seventh child was due to be born. Lord Vishnu instructed Sheshnaga, the King of the Serpents and servant of the Lord to take birth. By instructing His divine powers, Lord Vishnu transferred the child into the womb of Rohini, who was another one of Vasudevas wife and lived in Gokul. There, on Raksha Bandhan, Sheshnaga incarnated Himself as Shri Krishnas older brother Balabhadra, also called Baladeva or Balarama because of His phenomenal strength. Everyone thought that Devaki had miscarried, but in fact the child was safe in Gokul.
It was time for the eighth child to be born. With the disappearance of the seventh, Kamsa was increasingly anxious and fearful, keeping his sister under strict surveillance. As the eighth day approached, the heavens opened pouring forth their rain, and the Yamuna swelled. All celestial beings rejoiced and the air was overflowing with sweet anticipation and excitement for the birth of Bhagavan. At midnight, Shri Krishna was born with the brilliance of a thousand suns emanating from His divine form. The guards were put under a mysterious spell by the Lord and the doors of the prison cell opened. Vasudeva carried the radiant child on his head, and accompanied by Sheshnaga, he crossed the violent Yamuna River which made way for him as he walked. Vasudeva came to the house of his friend, Nanda, where his wife Yashoda had a daughter sleeping beside her. Everyone was asleep, and so Vasudeva left Shri Krishna safely with Nanda, and in exchange took the girl back with him to the jail.
As morning broke, Kamsa heard of the birth and rushed in to kill the eighth child. Devaki pleaded with him but Kamsa did not listen, snatching the girl from Devaki by her legs to smash to Her against a stone. As he picked Her up, She slipped from his hands and ascended into the sky taking the form of an eight armed and fearsome Goddess. She roared Kamsa, you fool! The eighth child, the one who will slay you, has already taken birth and is safe elsewhere.
Meanwhile, in Gokul the apparent birth of a son at Nanda’s home was celebrated joyously, and the whole town was immersed in festivities, all mesmerised by the divine child that Yashoda had bore. Shri Krishna grew up with His adopted parents Nanda and Yashoda in Gokul and in time He returned to Mathura to kill Kamsa with His brother Balarama.

Celebration of Janmashtami
Culturally, the festival is celebrated by devotees worldwide, particularly in shrines in Vrindavan, Mathura, and Dwarka for example. The festival is also celebrated as “Dahi handi” (meaning a pot full of curd), where men and boys will form a human pyramid to reach and break a pot hanging from a rope containing curd. Some devotees dress up and sing Shri Krishna’s holy names or hear of His divine pastimes. Others may perform folk dances such as raas, and cook sumptuous delicacies infused with devotion and fervour to offer to Shri Krishna. On this night, Bhagavan is worshipped in the form of ‘Lalji’, an infant, and is seated on a swing. Makhan is especially made since Shri Krishna was so fond of it as a child, and throughout the streets of India, the air is heavy with the chanting of the auspicious names of Bhagavan.
Many temples celebrate the birth at midnight as Janmotsav which literally translates to the celebration of the birth. However, in many shrines surrounding His birthplace, it is arrival of the Lord in the sacred Vraja and the beginning of His lila (divine play) which is more significant. Since it only became apparent that Bhagavan had entered Vraja the morning after, many local temples celebrate this coming of the Lord the next day, known as Nandostav  relating to celebrating the birth at Nandas home.

Singificance of Janmashtami
Deep down we are all searching for happiness, and through experience our sages tell us that spiritual joy is far superior to material, physical or emotional joy. This festival integrates all three and its true meaning becomes apparent: Shri Krishnaarpanamastu let everything be offered to Shri Krishna!
In the Srimad Bhagavad Gita, Shri Krishna states that He resides within the hearts of all, and so Janmastami isn’t just about His literal birth. It’s a reminder that we should see the light inside ourselves and recognise that same divinity in those around us. He is the source of all kinds of bliss, and so by establishing our head and heart in Him, we can achieve lasting happiness, sparking the spiritual ideal.