Navarathri translates to the nine nights, a festival in which many Hindus venerate the divine in a motherly form.
Origins
Navarathri occurs twice in the year: once in the month of Chaitra (April-May) and once in Ashvin (September-October), although there are other gupta (concealed) Navarathri through the year. The most celebrated is that of the month of Ashvin and is known as MahaNavarathri or the great Navarathri. Its tale comes from the renowned Devi Mahatmya and is one of evil, war and triumph. 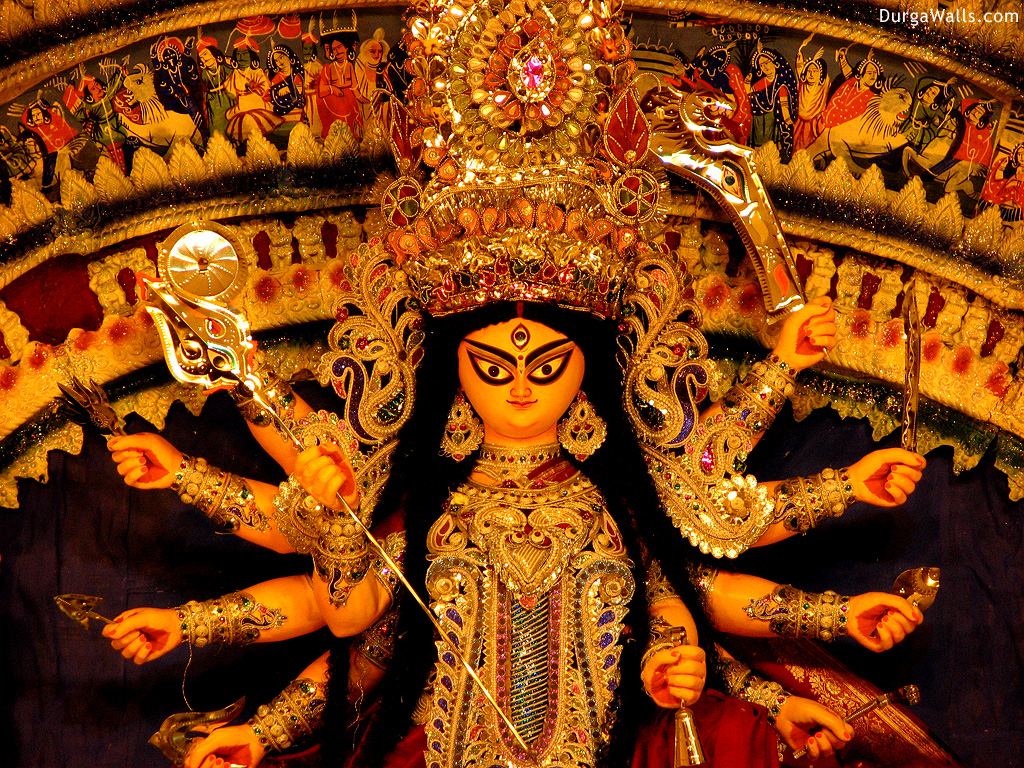 Mahishasura was a fierce demon threatening to overthrow the Devas (demigods) and conquer all three worlds. His father, the previous King of the Asuras (demons) married a princess cursed to live in the form of a water buffalo. Through the union of these two, the hideous Mahishasura was born, a shape shifter who could change his form from demon to mighty buffalo at will. After destroying all three worlds and committing unthinkable atrocities, the Devas tired of Mahishasuras onslaught and sought refuge in the Supreme Devi Durga. With the intelligence of Lord Brahma, the tactical wit of Lord Vishnu and the brute destructive force of Lord Shiva, Durga the invincible one was born.
For nine nights the Devi took on nine powerful forms to battle Mahishasura. The Devi Mahatmya describes how even the Devas were terrified of Her form and how Her laughter at the petty Asuras tore up the skies. Her might was unmatched, and hordes of the greatest of Asuras were annihilated by Her effortless warfare. On the tenth day, Durga drove her trishul (trident) into the heart of Mahishasura, and ended His tyranny forever. This day is known as Vijaya Dashami.
Significance
Navarathri is a time used by Hindus to appreciate God in the form of a mother. Although divine female figures exist in every religion, Hindu Dharma remains the only faith to view God in a female form. The Hindus belonging to this sect are called Shakta. Since the mother-child relationship is the most natural and the mother is a symbol of selfless affection and protection, many find it much easier to connect to God in this way.
Durga is also known as Shakti meaning energy. Although superficially the narrative teaches the triumph of virtue over vice, the idea of Shakti goes far deeper.
The Samkhya philosophy talks of Prakriti (Nature) and Purusha (man). One is ever still and centred whilst the other is revolutionary and dynamic. Lord Shiva represents the ever still and unmoving Purusha, the underlying reality of the Universe. However, Durga is the ever flowing and eternal drive that propels everything to happen. This concept is seen in the greatest galaxies  with their inner stability and outer motion  to the tiniest atom, with a central nucleus and the revolving electron. It is universal.
The battle of Devi and demon is itself symbolic; Mahishasura is half-man-half-buffalo, signifying our inner instincts that remain animalistic despite our outwardly appearance. Anger, greed, lust, envy: these are all primitive and destroyed by Durga. The buffalo is slow, dirty and weak whilst the lion is majestic, mighty and strong. Navarathri reminds us to develop ourselves from one to the other.
Navarathri is essentially the journey of the soul as it evolves. The first three days are dedicated to Mahakali (the great Devourer), the Goddess with a recognisable and ferocious form. She destroys the inner demons, vices, flaws, habits and tendencies that we may have. She cuts us free from the bondages that hold us back such as anger, fear or contempt. Having been cleansed of these, we move to the next three days, represented by Mahalakshmi. As the consort of Lord Vishnu, She bestows ever-lasting prosperity and progress. These allow fulfilment so that the soul can ascend to the final stage, symbolised by the last three days and the Goddess Mahasarasvati. She imparts divine knowledge on the soul having known which, everything is known.
This model isnt just symbolic of spiritual progression  it is the structure for achieving true progress. We always need to first assess and remove our obstacles, then mobilise our resources to fulfil what we need for our vision  before reaching out and grasping it.
Rituals
Navarathri is celebrated throughout the world. One of the most famous traditions associated with it is the Gujarati folk dance Garba. A clay pot housing a lamp which symbolises fertility and the feminine power of Durga is circumbulated throughout the nine days.
Navarathri is a time for celebrating the women in our communities and lives. Many fast, reflect and pray intensely during these days. In Bengal this is also the time of the great celebration of Durga Puja, where phenomenal murtis of Durga slaying the demon Mahishasura are produced by the Kumartuli clans. Many thousands flock to partake in the puja, which lasts for the final three days of Navarathri and Vijaya Dashami, before they disperse the murtis of Durga into the waters of the river.
Om bhavat?pa pran?shinyai ?nandaghana murtaye
jn?nabhakti prad?inyai m?tastubhyam namonamah.
Mother, I bow to Thee again and again, destroyer of worldly sufferings,
embodiment of bliss, dispenser of wisdom and devotion.