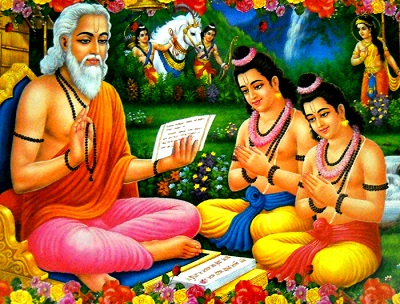 [Shri Rama and Lakshmana guard Yaga to completion – Sage Vishwamitra tells about the place in which River Sona flows, and in the process, his own charitham….]

On the 1st day of the yaga, in the morning, Shri Rama and Lakshmana asked at Brahmarishi Vishwamitra about the time during which they should be extra vigilant in guarding the yaga from the Rakshasas. The Rishis accompanying Sage Vishwamitra in the Yaga, told the princes that the Sage has started vratam and hence he will not speak. They answered the princes that the Yaga will happen for 6 days and 6 nights, and wished them to guard until its completion. Shri Rama and Lakshmana started to guard the yaga. Sage Vishwamitra, did many yagas for the welfare of the world. This was one. Perhaps, this was why he was called ‘Vishwamitra’ meaning ‘Friend of the World/Universe’.

Shri Rama and Lakshmana guarded the Yaga sala as how the eyelids protect the eyes. 5 days passed peacefully. On the 6th day, suddenly there was loud blast in the sky. Rakshasas Maricha and Subahu, along with other Rakshasas, appeared in the sky to hinder the Yaga. They started pouring blood into the Yaga kundam to destroy its purity. Shri Rama launched his astras at once, and shielded the Yaga kundam from being affected by their blood. Both, Shri Rama and Lakshmana countered Maricha and Subahu and all the other rakshasas effectively.

“Lakshmana! I will now demonstrate to you the power of Maanava astra, and you see how these rakshasas will run”, saying so, Shri Rama chanted the mantra and launched the astra at Maricha’s chest. It carried him alive miles apart in the sky and threw him into the sea. Wasting no time, Shri Rama also launched aagneya astra at Subahu. It hit Subahu’s heart and he died immediately. The others Rakshasas were also killed by the astras of Shri Rama and Lakshmana. Then, the Yaga completed successfully.
Sage Vishwamitra told Shri Rama, “Rama! Siddhashrama is the name of this ashram. It means ‘Execution/occurrence of what one thinks’. Today, it(my thought of completing this yaga) completed successfully because of you”, and blessed him.

Next morning, the sages at Siddhashrama told Shri Rama and Lakshmana, “Sage Vishwamitra will lead us (rishis) to Mithila, to take part in the yaga to be conducted by King Janaka. King Janaka has a mighty Shiva Bow. It was given to him by Celestials. Since then, no Deva, Yaksha, Gandharva, man was able to lift the bow and tie its ends with strings. If you can come with us, you can have a look at it.

Sage Vishwamitra, along with other rishis and the princes, left Siddhashrama. Prior to leaving, he paid respects, prayed all Vana Devtas[Forest Gods] and started. The animals and birds followed the Sage. But he caressed (loving touch) those animals/birds and directed them back to their homes. When they all reached the banks of River Sona, it was dusk/Sun set. They all finished the prayers for that time. Then, the Rishis and princes, sat before Sage Vishwamitra, to listen to him. Shri Rama asked Sage Vishwamitra to tell about the place, River Sona.

Sage Vishwamitra began:
“Once there lived a King called Kusha. He was the son of Lord Brahma. He did severe thapas and attained great fame. To propagate his progeny, as per Kshatriya dharma, he married Vaidehi. Four sons were born to them. All the four grew up, established 4 cities and ruled them. Kushanaba(read as Kushanaaba) was one among them. He married Krudhasi and got 4 girls. When they grew up, impressed by their beauty, Vayu wished to marry them. But the Girls rejected his request, and stated that they cannot marry him without their father’s assent. Angered Vayu cursed them to lose their beauty and turn ugly. The daughters told what happened to them to their father Kushanaba. Kushanaba praised his daughters for the respect shown to him, and being ‘Father’s daughters’. He praised them for their patience/endurance in accepting even a curse (to avoid humiliation to their father), and called it as a great dharma. He added,”Patience is a good ornament for both men and women. There is no Charity like patience; there is no truth like Patience; there is no glory like Patience; there is no yaga like patience; there is no dharma like patience. This earth sustains because of patience. I am proud of having you as daughters”. But, he lamented at their status and was thinking of who will marry his daughters, who have become ugly.

Soori was a great thapasvi. A woman called Somadha went to the Sage and asked him to bless with a child having the same characteristics as that of Soori. The Rishi produced a son out of his Manas[Maanasaputra] and gave him to Somadha. He was named Brahmadhaththa. He grew up as a Kshatriya and ruled Kambili as a good ruler. Kushanaba decided to give his daughters in marriage to Brahamadhaththa. He agreed and married the 4 daughters of Kushanaba and they lived happily.

Kushanaba was still upset as he did not have a son to further his clan. His father Kusha asked him to conduct Yaga. Kushnaba also performed yaga to get a son. Kusha told his son that he will get a son. Later, a son called Kadhi(read as Kaadhi) was born to him. Kadhi lived with great fame. I am the son of Kadhi. As I was born in the clan of King Kusha, I was named Kaushika. Vasu is one of the 3 brothers of Kushanaba. He ruled Girivraja. This Sona river flows through this Girivraja. I also have a sister. She married Riseega. She lived a righteous life, because of which she went to heavens with her womanly body. She was then blessed to flow as a river called ‘Kaushiki’ in the Himalayas. I live in that place. I came here to conduct Yaga”, said Sage Vishwamitra.

By this time, it was time for sleep. Sage Vishwamitra said to Shri Rama, “The moon is shining bright giving its cooling light. The Diurnals have started sleeping. The nocturnals (Rakshasas, Yakshas) have started functioning. It’s time to sleep. Let us all sleep”. They all started to sleep. When Sage Vishwamitra lied down to sleep, he resembled the sun that sets.

Some Takeaways:
1)Sage Vishwamitra’s Yaga for the Common Good or Welfare of the world.
2)Shri Rama’s commitment to protect the Yaga and ensuring its completion, winning the obstacles.
3)The respect which Daughters of Kushanaaba showed for him. The daughters declined Vayu’s interest to marry them. The character ‘Endurance/Patience’ which they showed even when cursed by Vayu to lose their beauty, which their father acknowledged as Great dharma.
4)Sage Vishwamitra worshipped Forest Gods. Forest Gods? – Yes, the practice of worshipping nature as God in Hindu Dharma, is an outcome of seeing God in everything/one or considering everything/one as God(Advaita).
One can also note that, responding to a Public Interest Litigation, the High Court of Tamizh Nadu, has said yesterday that, “Religious beliefs protect nature. Opposing nature worship in the guise of rationality is a reason for environmental destruction. It affirms that when nature gets sanctity, it will not be ruined, but protected”.

[Courtesy: Based on Valmiki Ramayanam by Shri. ‘Cho’ Ramaswamy]