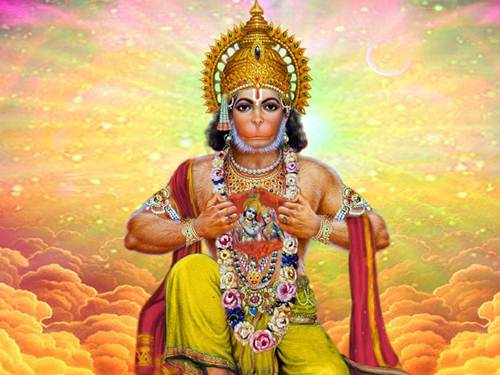 Hanuman Jayanti celebrates the birth of Lord Ramas most ardent devotee, Hanumanji. It is celebrated every year on the full moon day of the Chaitra month.
When we speak or hear of Hanumanji, we instantly think of the ideal sevak (servant) who epitomises sewa of the Lord at the very core of His being. Throughout the Ramayana, we see that Hanumanjis obedience towards God was unfathomable and He is seen as an embodiment of devotion and loyalty to Lord Rama. He is an ideal Karma Yogi (one whose devotion is demonstrated through selfless service, humility and devotion) and is the ideal of Prem (unconditional Love), Bhakti (devotion), Satya (truth)
Karuna (compassion)and Sewa
(selflessness service).

Pre-birth Story
Hanumanji was born to a cursed heavenly damsel who mocked the Sage Angirasa. Upon repenting, he blessed her with the boon of bearing a divine child. She was born as Anjana the daughter of Kunjar, the King of the monkeys. She married Kapiraj Kesari of Mount Sumeru, and unto them a son, Hanuman, was born. It is believed that Vaayu Deva (the God of wind) mediated the transfer of Lord Shivas energy to Anjanas womb, leading to one of Hanumanjis names being Pavan putra (son of the Wind). It is through Lord Shivas blessings that Hanumanji was born, and He is therefore also considered the 11 incarnation of Lord Shiva.
Other sources tell of how Vaayu carried the celestial prasad that emerged from a sacrificial ritual to Anjana. King Dasharatha (father of Shree Rama) carried out the ritual  the Putrakameshti yagna  for his queens to bear children. The prasad led to the birth of Lord Rama, Lakshman, Bharat and Shatrughna, and it is said that Anjana was delivered some Prasad through which Hanumanji was born.

Glory of Hanumanji
Born to Anjanadevi and Kesari, a powerful chief of the Vanaras (monkeys), Hanumanjis story is one that is extraordinary from birth. Yet, by far the most well-known role of Hanumanji was His unwavering service to Bhagavan Shree Rama throughout the epic Ramayana. Working as a servant, assistant and messenger for Sugriva,Hanumanji first met Shree Rama when he was searching for his wife Sitaji. Upon building bonds with Shree Rama, Hanumanji went off in search of Sitaji, eventually finding Her in Lanka. As well as consoling Sitaji, Hanumanji was able to gauge the strength of Ravanas army and succeeded in burning down half of Lanka before He left. Furthermore, aside from featuring prominently in the ensuing battle between Shree Rama and Ravana, Hanumanji was able to save the life of Shree Ramas brother Lakshman by bringing Sanjivani (a life giving herb) from the Himalayas.

Hanumanji also obtained boons of victory and immortality from Varuna Deva (water deity) and Yama (deity of death). From Brahma, he obtained the powers of inducing fear in enemies, destroying fear in friends, changing his form at will and travelling wherever He wished. From Lord Shiva, he obtained the boons of longevity (Chiranjeevi), scriptural wisdom and formidable strength. This all led to Hanumanji becoming mischievous and He began harassing sages. Bhrigu Rishi (a sage) then cursed him to forget the ability to use such powers, until a divine personality guides him to do so. Shree Rama was later to be that divine personality.
Hindus around the world worship Shree Hanumanji for his unparalleled qualities of valour, intelligence, strength, patience, wisdom, virtue, humility and courage. Above all, Hanuman Jayanti provides us with an opportunity to take inspiration from the boundless devotion shown by Hanumanji and seek to apply this in our own lives. Indeed, this selfless sacrifice is aptly summarised in the following shloka:
Yatra yatra raghunatha kirtanam,
Tatra tatra kritha masthakanjalim,
Bhaspavaari paripurna lochanam,
Maarutim namata raakshasanthakam
We bow to Shree Hanumanji who stands with his palms folded above his forehead, with a torrent of tears flowing down His eyes wherever the names of Shree Rama are sung.

Rituals
Hanumanji is the symbol of strength and energy. On the day of Hanuman Jayanti, devotees flock to Hanuman Mandirs across the world to sing his praises. Upon entering the Mandir, devotees will apply a sindhur (vermellion) tilak on their forehead.
As the story goes, Sitaji once was applying sindhur (vermellion) to her head. Hanumanji questioned why She did this. She replied that this would ensure a long life for Her husband, Shree Rama. Hanumanji then smeared His entire body with sindhur, in an effort to ensure Shree Ramas immortality.
Recitations of the Hanuman Chalisa (composed by Goswami Tulsidasji) take place frequently, and prasad is offered to all. One such verse of the Hanuman Chalisa depicts the greatness of Hanumanji:
Sub sukh lahe tumhari sharana
Tum rakshak kahu ko darna
All comforts of the world lie at your feet. The devotees enjoy all divine pleasures and feel fearless under your benign protection.